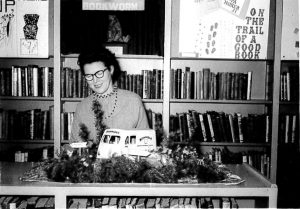 In response to a petition signed by three hundred taxpaying residents of Lincoln County, the Board of County Commissioners established the Free County Library on July 9, 1920. Charged with a mission of providing library services to the entire county, the new library was to given a small budget with which to hire a full-time librarian and to “[buy] books and [keep] up to date in every particular.” Prior to the creation of a county library, the Libby Woman’s Club had sponsored a small private library to serve the citizens of Libby. Members of the Woman’s Club voted to donate their collection of two thousand volumes to the new library to serve as a basis with which to begin the circulating collection.

Library services began in December 1920 under the direction of Miss Antonia Grandjean. The library board leased the former Libby Woman’s Club building to serve as the first home of the Free County Library. The Woman’s Club served as the library until 1923, when services were moved to the former First National Bank building and then, subsequently, to rented rooms in the Hotel Libby from 1929 to 1936. In 1936, the library moved to a wing of the new county courthouse which had been built specifically for library use. The building the Libby library currently occupies was built in 1964. The building was renamed the Inez R. Herrig building in honor of Lincoln County’s long-serving library director.

In accordance with its charged duty, the Free County Library’s services were expanded to include branch libraries in Troy (1922) and Eureka (1923), which are still in operation. Additional services in Fortine and Rexford were also established, but have since been discontinued. Remote regions of Lincoln County were provided with service through the use of a bookmobile from 1956 through 1976.

As Lincoln County has grown, the services provided by Lincoln County Library have been expanded to meet patron needs. Through such timely innovations as hiring the libraries’ first pages in 1945, automating circulation services in 1991, and becoming one of the first libraries in the state of Montana to offer free public access to the Internet, the libraries continuously strive to provide county residents with the best service possible.

Various construction projects have helped improve the county’s libraries. In 1998 the Libby Branch was remodeled, a project which nearly doubled the size of usable space in the building through the addition of the Reference Room in the basement. The renovation of the interior of the Eureka Branch in 2002 involved the installation of new shelves, new carpeting, and a new circulation desk and book return.

In September 2008, Lincoln County Library joined the Montana Shared Catalog, a cooperative project spanning one hundred sixty seven libraries throughout Montana. This undertaking provides Lincoln County residents with a valuable, collaborative resource which promotes the sharing of information in the form of print, audio, digital and visual materials.